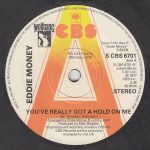 “You’ve Really Got A Hold On Me” is a song written by Smokey Robinson which became a 1962 Top 10 hit single for the Miracles on Motown’s Tamla label. One of the Miracles’ most covered tunes, this million-selling song received a 1998 Grammy Hall of Fame Award. It has also been selected as one of The Rock and Roll Hall of Fame’s 500 Songs that Shaped Rock and Roll. It was covered by English rock group the Beatles on their second album, With the Beatles. Many other musicians also recorded versions.

Eddie Money is the self-titled debut studio album by American singer-songwriter Eddie Money, released in December 1977 by Wolfgang Records, a subsidiary of major label Columbia. Money, a Brooklyn native, grew up interested in music. In 1968, he moved to Berkeley, California, where he became a staple of Bay Area nightclubs. Rock impresario Bill Graham […]