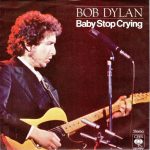 “Baby, Stop Crying” is a song written by Bob Dylan, released in the summer of 1978 as a single and in a longer album version on Street Legal. It was performed live only during his big-band worldwide tour of 1978. The song charted at #13 in the UK and was a top-ten song in much of Europe, although it failed to chart in the United States.

Dylan plays the role of consoler to a despairing woman in this song, even asking for a pistol in the opening verse, claiming he “can’t tell right from wrong.” Commenting on the content of this song, Dylan once said that “the man in that song has his hand out and is not afraid of getting it bit.” Like many of the tracks from Street Legal, “Baby, Stop Crying” features a saxophone and a trio of female backup singers. According to Billboard Magazine the female voices provide an “exciting counterpoint” to Dylan’s “raspy” vocal performance

Street-Legal is the 18th studio album by American singer-songwriter Bob Dylan, released on June 15, 1978 by Columbia Records. The album was a departure for Dylan, who uses a large pop-rock band including female backing vocalists. Tracks 1  Changing of the Guards (Bob Dylan) 06:37 2  New Pony (Bob Dylan) 04:29 3  No Time to […]