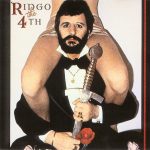 Ringo The 4th is the sixth studio album by English musician Ringo Starr, released in 1977. Its title is commonly alluded to him being the fourth member of the Beatles. Others allude that it is his fourth mainstream album, taking exception to his Great American Songbook homage, Sentimental Journey, and his country-western foray, Beaucoups of Blues. However in fact, Ringo the 4th is a dance-oriented record crafted for him by his Atlantic Records producer, Arif Mardin.

After the commercial disappointment of Ringo’s Rotogravure (1976), Starr decided to shift from his formula of using his well-known musician friends (notably his fellow ex-Beatles) to write songs and appear on his albums. Instead, he intensified his partnership with Vini Poncia, with whom he wrote several of the songs featured here, while using the input of different musicians. Sessions began on 5 February 1977, at Cherokee Studios in Los Angeles, produced by Arif Mardin. The first songs recorded were two unreleased tracks, “Lover Please” and “Wild Shining Stars”. Near the end of the month, Starr recorded “Out on the Streets”, “It’s No Secret” and “Gypsies in Flight”. In June, recording sessions were held at Atlantic Studios in New York where the tracks that ended up on the album were recorded. In addition, the B-side “Just a Dream”, as well as an unreleased track, “By Your Side”, were recorded. Starr moved back to Cherokee Studios, where he held more sessions towards the end of the month, where a few more unreleased tracks were recorded: “Birmingham”, “This Party”, and a different version of “Just a Dream”. David Foster played keyboards on a couple of songs, while Melissa Manchester and Bette Midler occasionally appeared on backing vocals.

1 Drowning In The Sea Of Love

5 Out On The Streets

7 Sneaking Sally Through The Alley