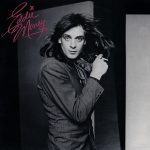 Eddie Money is the self-titled debut studio album by American singer-songwriter Eddie Money, released in December 1977 by Wolfgang Records, a subsidiary of major label Columbia. Money, a Brooklyn native, grew up interested in music. In 1968, he moved to Berkeley, California, where he became a staple of Bay Area nightclubs. Rock impresario Bill Graham subsequently discovered Money and signed him to his Wolfgang imprint.

The album was mainly written by Money, though half of its contents were also credited to guitarist Jimmy Lyon. Eddie Money was successful in the U.S., where it was eventually certified double platinum, denoting two millions copies shipped. Its singles were hits on AOR radio, with “Baby Hold On” and “Two Tickets to Paradise” crossing over into the Top 40 format. The former charted highest, reaching number 11 on the Billboard Hot 100. It is Money’s highest-selling album.