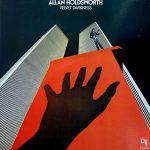 The tracks for the album were originally recorded by engineer Rudy Van Gelder at his Van Gelder Studio in New Jersey. According to Holdsworth, this was done during a rehearsal session, after which the tapes were released by CTI without his or the other band members’ consent. None of the musicians involved ever received royalties for their work. Holdsworth therefore considered the album an unauthorised release and not part of his discography.