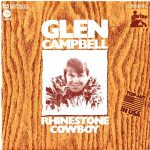 “Rhinestone Cowboy” is a song written by Larry Weiss and most famously recorded by American country music singer Glen Campbell. When released in 1975, it enjoyed huge popularity with both country and pop audiences.

Weiss wrote and recorded “Rhinestone Cowboy” in 1974, and it appeared on his 20th Century Records album Black and Blue Suite. It did not, however, have much of a commercial impact as a single. In late 1974, Campbell heard the song on the radio and, during a tour of Australia, decided to learn it. Soon after his return to the United States, Campbell went to Al Coury’s office at Capitol Records, where he was approached about “a great new song” – “Rhinestone Cowboy”

Rhinestone Cowboy is the 30th album by American singer/guitarist Glen Campbell, released in 1975. A 40th Anniversary re-issue was released on March 31, 2015, in North America on CD & 180g LP. The CD contains a previously unreleased track, “Quits”, which has been in the vaults at Capitol since it was recorded. It also contained […]