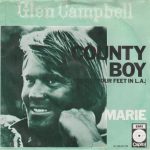 “Country Boy (You Got Your Feet in L.A.)” is a song written by Dennis Lambert and Brian Potter, and recorded by American country music singer Glen Campbell. It was released in October 1975 as the second and final single from the album, Rhinestone Cowboy.

It was Campbell’s fifth number one on the Easy Listening chart and went to number 11 in early 1976 on the Billboard Hot 100. “Country Boy (You Got Your Feet in L.A.)” also went to number three on the country chart

Rhinestone Cowboy is the 30th album by American singer/guitarist Glen Campbell, released in 1975. A 40th Anniversary re-issue was released on March 31, 2015, in North America on CD & 180g LP. The CD contains a previously unreleased track, “Quits”, which has been in the vaults at Capitol since it was recorded. It also contained […]