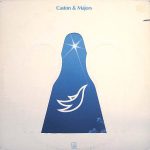 Caston & Majors is an album by Carolyn Majors and Leonard Caston, released in 1974 on Motown.

Leonard Caston Jr. (born November 13, 1943) is an American rhythm and blues songwriter, record producer, pianist and singer. He recorded for both the Chess and Motown labels in the 1960s and 1970s, and co-wrote or co-produced several major hit records. While at Motown, Caston also met, and later married, singer Carolyn Majors. They signed a contract as a recording duo, and, as Caston & Majors, recorded a gospel tinged self-titled album in 1974. The album was not a commercial success in the United States but contained the track “I’ll Keep My Light In My Window”, co-written by Caston with Terri McFaddin, which was later recorded by Diana Ross and Marvin Gaye, The Temptations, Ben Vereen, and in a Grammy-winning recording by The Mighty Clouds of Joy, among others.