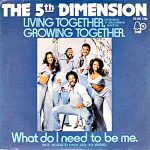 “Living Together, Growing Together” is a song written by Burt Bacharach and Hal David for the 1973 film, Lost Horizon. Originally performed by James Shigeta and the Shangri-La chorus in the film, the song had commercial success as a single performed by The 5th Dimension. The single, produced by Bones Howe and arranged by Bob Alcivar and Artie Butler, reached #5 on the U.S. adult contemporary chart, #9 on the Canadian adult contemporary chart, and #32 on the Billboard Hot 100 in 1973, marking the band’s last Top 40 hit. It was featured on their 1973 album, Living Together, Growing Together.