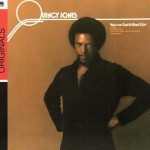 You’ve Got It Bad Girl is a 1973 album by the American jazz musician/producer Quincy Jones.

The title track is a song written by Yvonne Wright and was originally released on Stevie Wonder’s 1972 album Talking Book. Here Jones himself is performing the lead vocals. The album features another Stevie Wonder song: “Superstition”, featuring vocals from Bill Withers, Billy Preston and Wonder himself, billed as ‘Three Beautiful Brothers’

Also included are an instrumental interpretation of the Lovin’ Spoonful’s “Summer in the City”; and “Sanford and Son Theme (The Streetbeater)”, which was used for the opening and closing credits themes for the NBC situation comedy Sanford and Son.

The final track on the album, “Chump Change”, was first used as the main theme to 1972’s The New Bill Cosby Show on CBS, where Jones’s orchestra provided music. The CBS game show Now You See It used “Chump Change” as its main theme as well, both in 1974 and on its revival in 1989. It is also used as the main theme to the Dutch radio programme Langs de lijn, as well as the Norwegian Broadcasting Corporation´s programme Ukeslutt.

1 Summer In The City

3 Daydreaming / First Time Ever I Saw Your Face

4 Love Theme From “The Getaway”

5 You’ve Got It Bad Girl