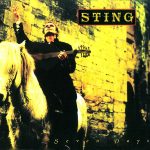 “Seven Days” is a single by Sting from his album Ten Summoner’s Tales, released in 1993. It reached #32 in the UK Charts.

Ten Summoner’s Tales is the fourth solo studio album by the English rock musician Sting. The title is a combined pun of his family name, Sumner, and a character in Geoffrey Chaucer’s The Canterbury Tales, the summoner. Released in 1993, it explores themes of love and morality in a noticeably upbeat mood compared to his […]