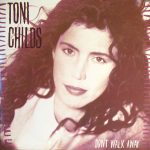 “Don’t Walk Away” is the first single from the Toni Child‘s album Union, released in 1988. It peaked at #72 in the US Billboard Charts and at #53 in the UK Single Charts.

Union is the debut album by American singer/songwriter Toni Childs. Released in 1988, the album peaked at #63 in the US (where it has since been certified Gold for sales of over 500,000 copies). It also peaked at #1 in New Zealand where it was certified 5x Platinum (75,000 copies sold). The album was recorded […]