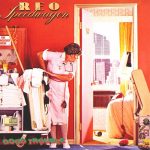 Good Trouble is the tenth studio album by REO Speedwagon, released in 1982 as a follow-up to Hi Infidelity. It was the second-best selling album in the band’s history, subsequently tied with Wheels Are Turnin’, peaking at #7 on the Billboard charts. The single “Keep the Fire Burnin'” gave the band a #7 hit on Billboard’s Pop Singles Chart and a #2 hit on the Mainstream Rock Tracks chart, their highest-charting hit on this chart.

None of the songs from this album have been performed by the band in concert since 1983 except “Keep the Fire Burnin'”, which was played as an acoustic version in their two shows at Valencia, Venezuela during the “Live As We Know It Tour ’87,” and has been played occasionally in more recent years. “The Key” was part of a five-song medley the band performed during their 2001 tour. In 2013, the album was released on CD by UK-based company Rock Candy Records, with expanded liner notes and photos.

3 Girl With The Heart Of Gold

4 Every Now And Then

7 Back In My Heart Again

9 Stillness Of The Night