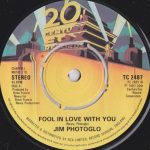 “Fool in Love with You” is a 1981 song by Jim Photoglo. It is the title track of his debut album and the first release from the LP, although it was his second single to chart.

“Fool in Love with You” is Photoglo’s most successful song, reaching number 25 on the U.S. Billboard Hot 100 and number 23 on Cash Box. It spent four months on the American charts.

The song was a bigger Adult Contemporary hit, reaching #11 in Canada and #12 U.S

Fool in Love with You is the second album by Jim Photoglo, released in 1981. James G. Photoglo is an American pop/soft rock singer and songwriter from Inglewood, California. He released two charting albums in the early 1980s and had two hit singles, “We Were Meant to Be Lovers” (#31, 1980) and “Fool in Love […]