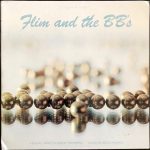 The selftitled album by Flim & The BB’s is their debut album, released in 1978.

Flim & the BB’s was a contemporary jazz band that was among the first bands to record albums digitally. Flim and the BB’s consisted of Jimmy Johnson, nicknamed Flim, on Alembic 5-string bass and the two BBs, Bill Berg on percussion and Billy Barber on piano, keyboard, and synthesizer, with their initials having a whimsical connotation of BB pellets. Woodwind-player Dick Oatts was a featured guest on their first album before becoming a full member of the band.