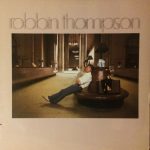 The selftitled album by Robbin Thompson was his debut album released in 1976 on Nemperor.

Robert Wickens “Robbin” Thompson (June 16, 1949 – October 10, 2015) was an American singer-songwriter based in Richmond, Virginia. Since 1976 he recorded several albums which included guest appearances by Melissa Manchester, Steve Cropper, Waddy Wachtel, Bruce Hornsby and Ellen McIlwaine, among others. He was a member of an early Bruce Springsteen band, Steel Mill, and co-wrote songs with Timothy B. Schmit, Phil Vassar and Butch Taylor and Carter Beauford of the Dave Matthews Band.

9 Another Cup Of Coffee And A Cigarette

10 Another Day Another Dollar