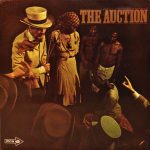 The Auction is the fifth album by David Axelrod released in 1972 on Decca.

David Axelrod (April 17, 1931 – February 5, 2017) was an American composer, arranger, and producer. After starting out as a staff producer for record companies specializing in jazz, Axelrod became known by the mid-1960s in soul and jazz circles for his recording skills. In 1968, Axelrod embarked on a solo career and released several eccentric albums during the 1970s that showcased his characteristic sound, which combined heavily microphoned drums and baroque orchestration, and avant garde themes ranging from the environment to heightened mental awareness.