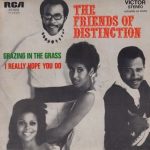 “Grazing in the Grass” is an instrumental composed by Philemon Hou and first recorded by the South African trumpeter Hugh Masekela.

The Friends of Distinction recorded a vocal cover version of the tune in 1969 on RCA Victor, which was also a Top Ten pop and R&B hit, reaching no. 3 on the former and no. 5 on the latter. One of the group’s members, Harry Elston, wrote lyrics for the song and sang lead on the Friends Of Distinction’s version of it.

Grazin’ is the debut studio album by R&B group The Friends of Distinction, released in 1969 on the RCA Victor label. The album peaked at No. 10 on the R&B albums chart. It also reached No. 35 on the Billboard 200. The album features the single, “Grazing in the Grass”, which peaked at No. 3 […]