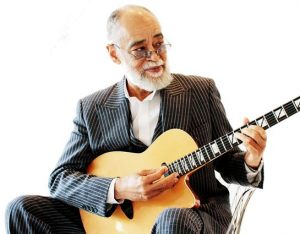 David Tyrone Walker (born June 25, 1941) is an American guitarist born in Tulsa, Oklahoma. In addition to numerous session musician duties since the early 1970s, Walker has issued fifteen albums in his own name.

David Tyrone Walker was born to a Native American mother and African American father. He attended David Starr Jordan High School in the Watts area of Los Angeles. He has recorded fifteen solo albums since his debut release, The Sidewalk, in 1967. He has also been a session rhythm and lead guitarist, appearing on numerous soul, funk, and jazz releases. His backup work was featured on several notable albums of the early 1970s, including Stevie Wonder’s Innervisions; Marvin Gaye’s Let’s Get It On and I Want You; Carole King’s Rhymes & Reasons and Fantasy; The Jackson 5’s Diana Ross Presents The Jackson 5, ABC, and Maybe Tomorrow; Michael Jackson’s Ben; and Quincy Jones’s Body Heat. He also played with the combo Afrique on its 1973 Afro funk release Soul Makossa.

His song “On Love” was sampled on the breakbeat compilation album Tribe Vibes Vol. 2 by the group A Tribe Called Quest. His guitar riff on Joe Sample’s “In All My Wildest Dreams” (from Rainbow Seeker) was sampled on Tupac Shakur’s song “Dear Mama”.

Recently he has gained popularity in Japan for playing guitar for the pop music group Dreams Come True, and on band member Miwa Yoshida’s solo albums, and has also performed live with them. He also leads his group on tours of Japan each year. He recently toured Japan with Marlena Shaw, Larry Carlton and a Brazilian artist Ed Motta. His earlier albums have found new life by being reissued in Japanese editions, along with “best of” collections. An album titled Thoughts was released in Japan in 2008. A holiday album titled Wear My Love was released in Japan in 2009. For All Time was released in 2010.