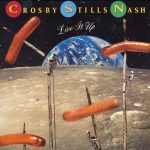 Live It Up is the tenth album by Crosby, Stills & Nash, their fourth studio album in the trio configuration, released on Atlantic Records in 1990. It peaked at #57 on the Billboard 200 with current sales of 300,000. It is the first of their studio albums not to gain either a gold or platinum certification by the RIAA. It was issued in all formats at the time (compact disc, cassette tape, and vinyl record).

After David Crosby’s release from prison, he reunited with Stephen Stills and Graham Nash for CSN tours in 1987 and 1988. The recording of the second CSNY studio album with Neil Young took place over the course of those years, but the quartet opted not to tour to promote it. The album was not well received, and Stills viewed it as “contrived”. In 1989, Stills and Young commenced tours with their own bands, while Crosby and Nash began work on what was to be a new Crosby & Nash record. Crosby was also recording his second solo album Oh Yes I Can that same year. Stills regrouped with Crosby and Nash to perform at the collapse of the Berlin Wall in late 1989, and the sessions for the new Crosby & Nash album evolved into the new Crosby, Stills & Nash one instead. Atlantic had encouraged the inclusion of Crosby into the Stills–Nash project that became Daylight Again back in 1981

2 If Anybody Had A Heart