1989 Andy Qunta – Legend In A Loungeroom 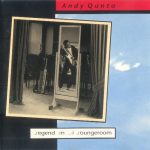 Legend In A Loungeroom is an album by Andy Qunta, released in 1989.

Anderson Amos Temba “Andy” Qunta (born 9 January 1951) is an English singer, songwriter, composer and musician. In a career spanning more than 40 years, Qunta is best known as the keyboardist of the Australian rock band Icehouse from between 1982 and 1988. As a popular musician, he has been influenced by artists including the Who, Cliff Richard, Jimi Hendrix, Genesis, Manfred Mann, Yes, Todd Rundgren and Queen.