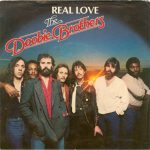 “Real Love” is a hit song by The Doobie Brothers. It was the first of three single releases from their 1980 LP, One Step Closer.

“Real Love” became the greatest hit from the album, reaching #5 on the U.S. Billboard Hot 100 during the fall of the year. The song is the group’s third highest-charting U.S. single after their two number-one hits, “Black Water” and “What a Fool Believes.” The song reached #12 in Canada. It was also a Top 20 Adult Contemporary hit in both nations.

The song became the second of nine songs entitled “Real Love” charting on the U.S. Billboard Hot 100 between 1980 and 1996, with the final being the Beatles’ hit. It is also the second biggest hit with the title, the biggest one being the Jody Watley song.

One Step Closer is the ninth studio album by American rock band The Doobie Brothers. The album was released on September 17, 1980, by Warner Bros. Records. The album included the hit “Real Love”, which reached #5 on the Billboard Hot 100; this also marks the last studio album with Michael McDonald in the lineup. […]