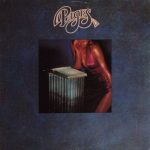 Pages‘ eponymous first (and selftitled) album was released in 1978, featured tracks ranging from light funk (“Clearly Kim”), calypso (“Love Dance”) and driving rock (“Room At The Top”) to smooth, harmonious ballads (“This Is For The Girls,” “I Get It From You”) and luscious instrumentals (“Interlude”).

The album featured an impressive array of session musicians. The roster of talent included Colomby, Philip Bailey (Earth, Wind & Fire), Steve Forman, Dave Grusin, Claudio Slon, Victor Feldman and Michael Brecker. Although Page provided most of the lead vocals, George took the lead on “Let It Go” and “Listen For The Love.”

Colomby was quoted as saying that “Pages represents the mainstream of contemporary music. They utilize various elements and combine them into an original and tasty mixture that will appeal to all formats of radio.” Despite Colomby’s prediction, radio found it hard to place the group’s sound. Neither Pages nor its single “If I Saw You Again” made the Billboard charts. Leinheiser and Battelene went their own way after the album was recorded.

2 This Is For The Girls

4 Listen For The Love

6 If I Saw You Again

9 Room At The Top