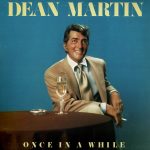 Once In A While is a 1978 studio album by Dean Martin, produced by Jimmy Bowen. It was released four years after it was recorded.

The album consists of traditional pop music standards, recorded in country pop arrangements. Many of the songs were associated with singer Bing Crosby.