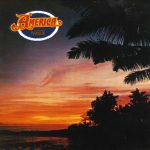 Harbor is the seventh studio album by American folk rock trio America, released by Warner Bros. Records in February 1977. It was the last to feature Dan Peek, who embarked on a solo Christian career shortly after the album’s release. The album was produced by George Martin.

Though a major commercial disappointment compared to America’s six previous albums, the album did reach number 21 on the Billboard album chart. Three singles (“God of the Sun”, “Don’t Cry Baby” and the disco song “Slow Down”) were released from the album but all failed to chart, although “God of the Sun” and “Now She’s Gone” did get some airplay.