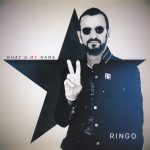 What’s My Name is the 20th studio album by English musician Ringo Starr. It was released on 25 October 2019 through Roccabella and Universal Music Enterprises. The album was again recorded at Roccabella West, Starr’s home studio, and features collaborations with Joe Walsh, Benmont Tench, Edgar Winter, Steve Lukather, Richard Page and Warren Ham. It also includes a cover of John Lennon’s “Grow Old with Me”, which Starr invited Paul McCartney to sing and play bass guitar on, and a solo version by Starr of “Money (That’s What I Want)”, a Motown song previously recorded by the Beatles.

Several of the tracks were written with previous collaborators based around comments Starr has made. “What’s My Name”, the title track and first single, was composed by Colin Hay, and comes from a chant Starr has used in concert. Starr co-wrote “Gotta Get Up to Get Down” with his brother-in-law Joe Walsh after a comment Starr made at a dinner they had with Klaus Voormann, while Starr composed “Thank God for Music” with Sam Hollander, who then wrote “Better Days” on his own based on an interview Starr gave to Rolling Stone. The song “Magic” is a collaboration with Steve Lukather, whom Starr has worked with on his two previous studio albums.

The album was recorded in Los Angeles at Starr’s home studio, Roccabella West, with Starr saying that he did not “want to be in an old-fashioned recording studio anymore” and that he had “had enough of the big glass wall and the separation”, saying recording at his home has been good for himself “and the music”.

1 Gotta Get Up To Get Down

2 It’s Not Love That You Want

3 Grow Old With Me