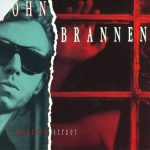 Mystery Street is an album by John Brannen, released in 1988 on Apache Records.

John Brannen (born March 19, 1952, Savannah, Georgia, United States) is an American roots rock/ heartland rock, singer-songwriter whose song, “Somebody,” appeared on the Eagles album, Long Road Out of Eden. Brannen is heralded as an “underground legend,” and has been active as a songwriter and performer since the early 1980s.

In the 1980s John Brannen spent time in New York City and Nashville before being wheedled into a move to the West Coast by Joe Walsh, guitarist for the Eagles, who had become a friend and mentor of Brannen’s. The move to Los Angeles quickly paid off, as Brannen landed an artist deal at the Capitol Records imprint, Apache Records. His Apache debut, Mystery Street found its way into the Top 20, and the music video for his first single “Desolation Angel” garnered considerable attention as an MTV Hip Clip. By 1993, in the wake of the success of Mystery Street, Brannen was signed by the recently renamed Mercury Nashville Records. His eponymous debut for Mercury Nashville contained the single “Moonlight and Magnolias,” which became a Top 10 hit on VH1. In an effort to launch Brannen’s career, Mercury Nashville chose him for one of three slots on the Triple Play Tour. The remaining two slots were filled by Shania Twain and Toby Keith.