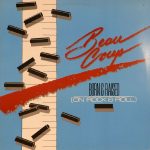 Born & Raised (On Rock & Roll) is an album by the band Beau Coup, released in 1987 on Amherst Records.

Beau Coup is an American rock band from Cleveland, Ohio and began in the year of 1983 as a recording project and performed under the name Pop Opera. They changed their name to Beau Coup at the end of 1984. The project was started by vocalist Tommy Amato (not to be confused with the prolific session drummer of the same name, also from Cleveland), guitarist Mike McGill and drummer Eric Singer. Eventually, Amato invited keyboardist and songwriter Dennis Lewin to join the project while he was playing in a band called Jonah Koslen and the Heroes.

In that same year after the Heroes disbanded, Lewin, Tommy’s older brother Frank and Bill March joined the project. With the help from Henry LoConti, Sr. and Henry LoConti, Jr., proprietors of the Agora Theatre and Ballroom and the “Agora Record Label”, the band released their 6 song EP titled Beau Coup, known as their (White Album)  which featured mostly Lewin’s songs. The first single released from that EP was “Still In My Heart” which was authorized for airplay by 98.5 WGCL’s WNCX General Manager and Program Directors. The song became a top 10 record on the station. Subsequently Rock ‘n Roll Records, a subsidiary of Scotti Brothers Records signed the band and the song was distributed by CBS Records in the year of 1984. Program Director John Gorman (radio) at WMMS also took great interest in Beau Coup and gave them extensive airplay and invited them to participate in many station events as well.

After much struggle with Scotti Brothers Records and after being released by the label, the Beau Coup “Born & Raised on Rock & Roll” album, CD, and cassette were finally released on the Amherst Record label in the USA and on A&M Records of Canada and Europe in 1987

2 Somewhere Out In The Night

7 Still In My Heart

Related Terms:
1979 Leon Ware – Inside Is Love 2004 Brenda Russell – Between The Sun And The Moon