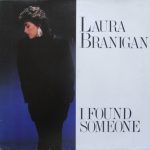 “I Found Someone” is the name of a chart single originally written and composed for Laura Branigan by Michael Bolton and Touch keyboardist Mark Mangold. The song was a bigger hit for Cher in 1987, reaching the Top 10.