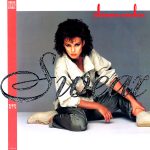 “Swear” was a 1980s pop song by Tim Scott McConnell and released by Sire Records in 1983. The music video to promote the song was a campy/tongue-in-cheek music video of a hippy-based pagan/black mass set in a church. The stylized music video is seemingly a parody of late 1960s to early 1970s hippy horror movies.

McConnell would later comment on the song: “This was my young and confused record…I wrote the songs over a couple of weeks on a little Casio keyboard…Sire heard it and offered me a deal…no use appologising for such a thing…my mistake… the good part of it was working with Richard Gottehrer …really took me under his wing…shame we were working on the wrong kind of music..”

“Swear” was covered by Sheena Easton for her 1984 album A Private Heaven. It reached #80 on the Billboard Hot 100 chart the following year.

A Private Heaven, released in 1984, was the seventh album release by Scottish singer Sheena Easton. Released by EMI America, the album featured two US Top 10 hit singles: the sassy lead single “Strut” and the controversial “Sugar Walls.” A third single, “Swear”, reached #80. The album itself reached US #15 and sold over one […]