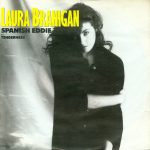 “Spanish Eddie” is a song by American singer Laura Branigan released as the lead single from her fourth album, Hold Me. The single was produced by Jack White and arranged by Harold Faltermeyer. A moody black-and-white photo appeared on the picture sleeve and the single was promoted by a music video. Released in July 1985, the record became Branigan’s sixth Top 40 hit in the U.S. in two and a half years, peaking at #40 on the Billboard Hot 100 and #37 on the Cash Box singles chart. A 12″ dance version featuring an extended remix of the Branigan-penned B-side, “Tenderness”, as well, gave her highest U.S. peak for the song, at #26. The Billboard Adult Contemporary chart peak for “Spanish Eddie” was #29.