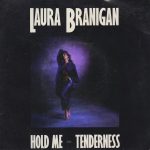 “Hold Me” is a song by the American pop singer Laura Branigan, released in 1985 as the second single from her fourth studio album Hold Me. It was written by Bill Bodine and Beth Andersen, and produced by Jack White and Harold Faltermeyer.

Following the Top 40 success of the first single from Hold Me, “Spanish Eddie”, “Hold Me” was released as the follow-up single. It reached No. 82 on the U.S. Billboard Hot 100 Chart and No. 39 on the Billboard Dance/Club Play Songs Chart