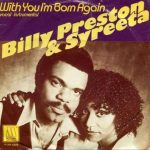 “With You I’m Born Again” is a 1979 duet written by Carol Connors and David Shire that originated on the soundtrack of the 1979 motion picture Fast Break. It was performed by Motown recording artists Billy Preston and Syreeta Wright (credited as Syreeta) and became an international hit for the duo, reaching number four on the Billboard Hot 100 and number two on the UK singles chart.

Fast Break is a 1979 American comedy film directed by Jack Smight and produced by Stephen Friedman. The film stars Gabe Kaplan as David Greene, Harold Sylvester as D.C. and Bernard King as Hustler. The film was Kaplan’s big-screen debut, although he had made earlier appearances on television sitcoms and movies, and was one of […]