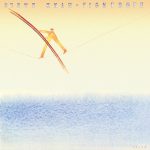 Bob James who just got him signed to Columbia Records produced the album for his own Tappan Zee label, a sub-division of Columbia. Bob James plays a then fashionable Oberheim polyphonic synthesizer. All other musicians were (at some point) members of the Brecker Brothers band including Kahn himself who was part of the band in the years just before his solo debut and was featured on their second album, the 1976 Back to Back and the following Don’t Stop the Music. Kahn writes: “At the time, I suppose I felt it was my ‘mission’ to somehow maintain the original sound and line-up of the Brecker Bros. Band, only featuring my guitar a little more.” On his website he also states that Tightrope was his best-selling album he has “ever made, and is probably directly attributable to the inclusion of […] “Darlin’ Darlin’ Baby,” originally recorded by the O’Jays.”