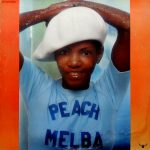 Peach Melba is the fourth album by singer Melba Moore, released in 1975: her Buddah Records debut, Peach Melba was Moore’s first studio album since 1971 (the singer’s third album had been the 1972 concert album Melba Moore Live!). Moore would credit her husband/manager Charles Huggins, whom she married in September 1974, with getting her signed to Buddah.