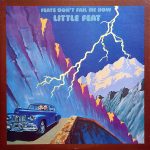 Feats Don’t Fail Me Now is the fourth studio album by the American rock band Little Feat, released in 1974. The cover was designed by Neon Park.

According to Richie Hayward, “Wait Till the Shit Hits the Fan” dates back to their debut but the band had trouble recording it on the last two albums due to its irregular 7
8 meter. It was scrapped until the sessions for this album when it was recorded live in the studio as “The Fan” while the original version appeared on Hotcakes & Outtakes: 30 Years Of Little Feat.

On the single version of Spanish Moon (according the box set Hotcakes & Outtakes, released in 2000) :