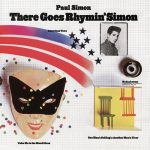 There Goes Rhymin’ Simon is the third solo studio album by American musician Paul Simon rush-released on May 5, 1973. It contains songs covering several styles and genres, such as gospel (“Loves Me Like a Rock”) and Dixieland (“Take Me to the Mardi Gras”). It received two nominations at the Grammy Awards of 1974, including Best Pop Vocal Performance, Male and Album of the Year.

As foreshadowed by the feel-good lead single “Kodachrome” (which reached #2 on the Billboard charts, behind Billy Preston’s “Will It Go Round in Circles”), There Goes Rhymin’ Simon was a bigger hit than its predecessor, reaching #2 on the Billboard 200 chart (behind George Harrison’s Living in the Material World), and #1 on Cashbox Magazine for one week from June 30, 1973. In the United Kingdom, the album peaked at #4. Subsequent singles were also the #2 single “Loves Me Like a Rock” (knocked off by Cher’s “Half-Breed”, but reaching #1 on Cashbox on September 29, 1973), and the Top 40 hit “American Tune”. Also “Take Me to the Mardi Gras” was released in the UK reaching the Top 10.

The song “Kodachrome” is named after the Kodak film of the same name. Kodak required the album to note that Kodachrome is a trademark of Kodak. The song was not released as a single in Britain, where it could not be played on BBC radio due to its trademarked name. The song “Was a Sunny Day” has an interesting reference to early rock and roll in the line “She called him Speedo but his Christian name was Mr. Earl” which echoes the chorus from the 1955 song “Speedoo” by The Cadillacs: “They often call me Speedo but my real name is Mr. Earl,” referring to lead singer, Earl “Speedo” Carroll.

3 Take Me To The Mardi Gras

5 One Man’s Ceiling Is Another Man’s Floor

7 Was A Sunny Day

8 Learn How To Fall