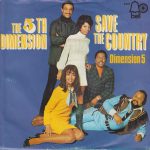 “Save the Country” is a song written by Laura Nyro, first released by her as a single in 1968. Nyro released another version of the song on her 1969 album New York Tendaberry.

Nyro was inspired to write the song after the June 5, 1968 assassination of Robert Kennedy. The most successful version was performed by The 5th Dimension. It reached #10 on the U.S. adult contemporary chart, #24 in Canada, #27 on the Billboard Hot 100, and #79 in Australia in 1970. It was featured on their 1970 album Portrait. The song was produced by Bones Howe and arranged by Bill Holman, Bob Alcivar, and Howe.

Portrait is the fifth album by American pop group The 5th Dimension, released in 1970. This is the group’s first album for Bell Records, having switched from the Soul City Records label. The cover features an impressionistic portrait by famous artist LeRoy Neiman. The album languished in the mid-60s on the Billboard Top 200 Album […]