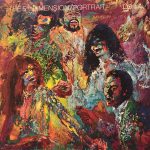 Portrait is the fifth album by American pop group The 5th Dimension, released in 1970. This is the group’s first album for Bell Records, having switched from the Soul City Records label. The cover features an impressionistic portrait by famous artist LeRoy Neiman.

The album languished in the mid-60s on the Billboard Top 200 Album Charts after the release of its first three singles, none of which entered the Top 20 of the American pop music charts. Bell Records, hoping to see a return on the investment they made by signing The 5th Dimension after the group’s contract at Soul City Records ended, made a fourth and final attempt at a hit – a relatively uncommon practice at the time – with the release of Burt Bacharach and Hal David’s “One Less Bell to Answer”. The single rose all the way to #2 by Christmas 1970, becoming one of the group’s greatest hits of all time. As a result, Portrait began climbing the charts once again, eventually peaking at #20. The single features Marilyn McCoo on lead vocal, and ushers in The 5th Dimension’s transition from pop to adult contemporary artists. McCoo from this point became the primary vocalist for the group’s subsequent chart hits, including “Last Night (I Didn’t Get to Sleep at All)”, “Love’s Lines, Angles and Rhymes”, “Never My Love”, “If I Could Reach You”, “House for Sale”, “Everything’s Been Changed” and “Flashback”. This became a source of friction for the group as time went on, and was in part responsible for McCoo and husband Billy Davis, Jr. leaving the group after the release of Earthbound in 1975.

2 One Less Bell To Answer

4 This Is Your Life

8 Medley- The Declaration,A change is Gonna Come,People Gotta Be Free