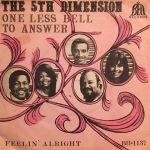 “One Less Bell to Answer” is a song written by Burt Bacharach and Hal David. Originally written in 1967 for Keely Smith, the song was rediscovered in late 1969 by Bones Howe, the producer for The 5th Dimension, and the song was included on the group’s 1970 debut album for Bell Records, Portrait. Lead vocals on the single were sung by Marilyn McCoo.

Portrait is the fifth album by American pop group The 5th Dimension, released in 1970. This is the group’s first album for Bell Records, having switched from the Soul City Records label. The cover features an impressionistic portrait by famous artist LeRoy Neiman. The album languished in the mid-60s on the Billboard Top 200 Album […]