1970 George Benson – The Other Side Of Abbey Road 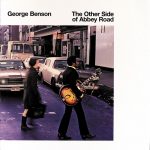 The Other Side of Abbey Road is a 1970 studio album by American guitarist George Benson of songs from The Beatles’ 1969 album Abbey Road. It was his last album for A&M Records.

Online music service Rhapsody praised the album, calling it “winning”, a “delightful release”, and citing it as one of their 20 favorite cover albums.