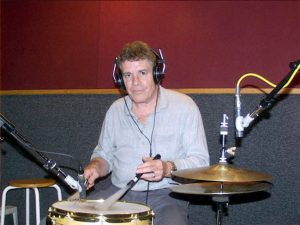 John Payne Guerin (October 31, 1939 – January 5, 2004) was an American percussionist. He was a leading proponent of the jazz-rock style, and was one of the most prolific drummers of his time.

Guerin was born in Hawaii and raised in San Diego. As a young drummer he began performing with Buddy DeFranco in 1960. In the late 1960s he moved to Los Angeles where his talented drum work was utilized by artists including Frank Sinatra, The Beach Boys, George Harrison, Frank Zappa, The Animals, Bonnie Raitt, Joni Mitchell, Them, Thelonious Monk, Lou Rawls, Ray Conniff, George Shearing, Peggy Lee, Ella Fitzgerald, Linda Ronstadt, Nelson Riddle and countless others.

From July 1972 to January 1973 he was the drummer for The Byrds, and joined the L.A. Express later that year. The band served as Joni Mitchell’s back-up band on tour during the mid- to late-1970s; Guerin had a brief relationship with Mitchell during that time. She later wrote the song Hejira about leaving him.

Guerin was a leading exponent of the jazz-rock style, leading it into new territory. He was extremely prolific, and played in many different genres, including for film and television. Among his many contributions to motion picture and television scores, Guerin worked on the soundtrack to the 1988 film homage to Charlie Parker, Bird by Clint Eastwood. Those are also his drums on the theme song during the opening credits for the television series Hawaii Five-O.