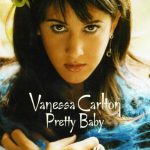 “Pretty Baby” is a song by Vanessa Carlton from her debut album Be Not Nobody. The song was released as the third single from the album in 2003.

Be Not Nobody is the debut studio album by American singer-songwriter Vanessa Carlton, released on April 30, 2002, through A&M Records. As of late 2004 the album had sold 1.38 million copies in the US according to Nielsen SoundScan, and Variety magazine reported in July 2003 that it had sold 2.3 million worldwide. Billboard magazine […]