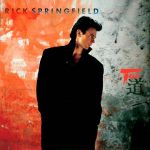 Tao is the ninth studio album by Rock singer Rick Springfield. It was released in 1985 on RCA Records.

With Tao, Springfield decided to experiment with new wave and synthrock. Springfield noted in a 2012 interview, “Tao had a lot of European influences and I perhaps went a little bit too far in that direction. The production was more European orientated, with the massive synths and that stuff actually did it really well in Europe, especially in Germany, ‘Celebrate Youth’ was a hit.” Springfield considers Tao to be his finest album to date. “We just had a lot of new ideas. It is probably the one I experimented on the most. Whatever I thought of we tried it. It was just when sampling was just starting, we got really into the drum sampling. But we started on just a DMX. A little DMX drum machine, all the original drum tracks were laid down on that, and then we triggered other drum samples from that. It was built up track by track. That is still my favorite album.” Springfield recalls, “I had stopped listening to American rock by 1984. In fact, I was getting increasingly interested in what was going on in other types of music, especially with artists who were English.”

In the liner notes for the collector’s edition CD of “Tao” Springfield comments, “I was going through a major depression back then, and had been for a few years. I was spiritually lost, and finding it hard to cope with everything that was going on. Even my success was causing me pain. I couldn’t come to terms with earning so much money while others were struggling to find small change even to eat. It seemed so wrong, but what could I do about it? On top of that, I had real problems dealing with my father’s death. It all meant that I was in such a mess, which is why the lyrics on the “Tao” album are definitely the darkest of my career.”

1 Dance This World Away

1968 Don Ellis And His Orchestra – Autumn