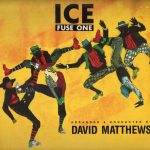 Fuse One was a group of jazz musicians who collaborated for two albums released on CTI Records and one album released on GNP Crescendo Records.

The albums Fuse One and Silk were produced by Creed Taylor. The first album was arranged by Jeremy Wall of Spyro Gyra, the second by Leon Chancler of Weather Report and the third by Dave Matthews.

The liner notes to their first album described the group thus: “Fuse One is conceived as a forum in which major contemporary musicians perform according to their own musical disciplines and without the constraints that accompany leader responsibilities. Each player brings in new compositions and ideas.