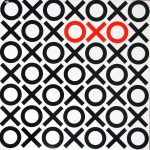 OXO was an American dance-rock band formed in 1983 by Ish ‘Angel’ Ledesma, the former lead singer of Foxy. He formed the band with guitarist Orlando Nuñez, bass player Frank Garcia, and drummer Freddy Alwag. The band’s only Top 40 hit was “Whirly Girl,” a song about Ish’s wife, which, according to Ledesma, was originally titled “Worldly Girl.” Despite its one-hit wonder, OXO’s success was not to last, and the band broke up a few years later.

Episode 104 of the Showtime series This American Life, based on the long-running PRI radio show, focuses on Frank Garcia and OXO.

The single “Whirly Girl” gained notoriety in the popular unreleased film, “Flim Flam”, starring Dave The Star. Whirly Girl is the inspiration for the cultural phenomenon called “Knacking”. Knacking involves extending one’s arm out, open-palmed, in fast motions synchronized with a beat or a random percussive sound in a song, while in close proximity to an observer, preferably without inadvertently hitting the observer.