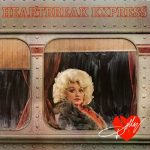 Heartbreak Express in the twenty-fourth solo studio album by Dolly Parton. It was released on March 29, 1982, by RCA Records. The album returned Parton to a more fully realized country sound (a process she had begun on the previous year’s 9 to 5 and Odd Jobs), after her late 1970s pop recordings. The album’s first single, “Single Women”, a slow-tempo honkytonk ballad about a singles bar, was written by Saturday Night Live writer Michael O’Donoghue, and had previously appeared in an SNL skit in late 1980. The single provided a top ten single for Parton. The title cut also was a top ten hit for her. “Do I Ever Cross Your Mind” (a song Parton had written in the early 1970s but had never officially recorded) appeared as a double-A-sided single (along with Parton’s rerecording of “I Will Always Love You” from the Best Little Whorehouse in Texas), and reached No. 1 on the country charts in August 1982.

“Hollywood Potters”, Parton has explained to interviewers, came out of her experience filming the movie 9 to 5, as Parton watched many of the film’s extras and bit players, who had worked very hard at acting through the years, but with very little success.