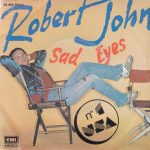 “Sad Eyes” is a song written and recorded by Robert John, and released in April 1979. It debuted May 19 on the Billboard Hot 100, reaching the top of the chart on October 6. The song was produced by George Tobin in association with Mike Piccirillo.

“Sad Eyes” is one of just a few non-disco, or disco-influenced, songs to top the 1979 pop chart, although by then the anti-disco backlash had made it easier for other styles to reach the top. It is also notable as the song that ended the six-week reign of the biggest smash hit of the year, The Knack’s “My Sharona.”

The self titled album by Robert John was his third ablum, released in 1979. Robert John (born Robert John Pedrick, Jr., January 3, 1946) is an American singer-songwriter perhaps best known for his 1979 hit single, “Sad Eyes”, which reached number 1 on the US Billboard Hot 100. Tracks 1  That’s What Keeps Us Together […]