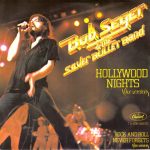 “Hollywood Nights” is a song written and recorded by American rock artist Bob Seger. It was released in 1978 as the second single from his album, Stranger in Town. The single edit reached No. 12 on the US Billboard Hot 100 chart. In the UK, the full five-minute version was released as a single on black and silver vinyl, and gave him his chart debut at No. 42. A live version from the in-concert album Nine Tonight in 1981 was issued in the UK as a single and charted at No. 49, while a reissue of the original version in 1995 charted at No. 52