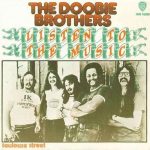 “Listen To The Music” is a song recorded by The Doobie Brothers on their second album Toulouse Street. This song was the Doobie Brothers’ first big hit in 1972. It was written by Tom Johnston.

Writer Tom Johnston described the motivation for the song as a call for world peace:

“The chord structure of it made me think of something positive, so the lyrics that came out of that were based on this utopian idea that if the leaders of the world got together on some grassy hill somewhere and either smoked enough dope or just sat down and just listened to the music and forgot about all this other bullshit, the world would be a much better place. It was very utopian and very unrealistic (laughs). It seemed like a good idea at the time.”
The studio recording used both a banjo and a prominent flanging effect, audible from the bridge until the fadeout. When released as a single by Warner Bros. Records, the song peaked at number 11 on the Billboard Hot 100 in November 1972.

The commercial success of “Listen to the Music” helped the album Toulouse Street rise on the charts. The song remains a staple of adult contemporary and classic rock radio. The band also uses it as an encore song during live shows. Patrick Simmons, the second guitarist and vocalist in the group, sings the bridge of the song.

Toulouse Street is the second studio album by American rock band The Doobie Brothers. The album was released on July 1, 1972, by Warner Bros. Records. It was their first album with new bassist Tiran Porter and second drummer Michael Hossack to augment existing drummer John Hartman, so it meant that they now had their […]